The 2004 Boxing Day tsunami is considered the deadliest tsunami in history, killing more than 230,000 people in 14 countries.

It started at 7:59 pm local time on December 26, 2004 with a magnitude 9.1 earthquake off the northern tip of Sumatra, Indonesia. 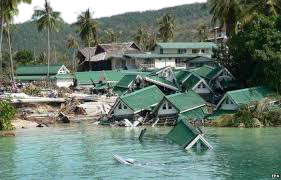 Scientists say the quake was the third-largest on record, lasting 10 minutes and shaking the earth by a centimeter.

It displaced about 30 cubic kilometers of water and caused a massive tsunami in the Indian Ocean.

Anatomy of Tsunami (Reuters)
Within 15 minutes of the quake, waves began to rise off the coasts of North Sumatra and Nicobar Islands.

The epicenter was reported below the Pacific Ocean floor, however; no tsunami alert was issued.

Two hours after the quake, the waves reached Sri Lanka, India and Thailand.

An hour later they reached the Maldives and over seven hours after the initial earthquake, a tsunami struck off the east coast of Mauritius and Africa.

Its effects extend as far as Antarctica and North America.